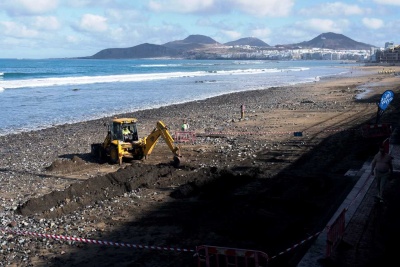 The Ciudad de Mar Council of the municipality of Las Palmas de Gran Canaria has proceeded during the morning of Thursday, in the area of La Cícer, on the beach of Las Canteras, the withdrawal of two iron pipes and microcement that were part of the old power station of La Cícer. The works, in charge of the company Patrimonial War, have been developed in conditions of low tide, between 10.00 and 14.00 hours. The workers will continue tomorrow Friday, November 30, the works and extract a third pipeline.

"These ducts had been buried in the sand for decades and, recurrently, each time there was loss of sand in the area, surfaced. This is what has happened these days so we decided to act effectively and quickly, urgently, "said the City of Mar councilor, José Eduardo Ramírez, who oversaw the operation this morning. "We had to take advantage of the favorable conditions," he added.

The workers have managed to extract an iron pipe of 1.5 meters long and about 40 centimeters in diameter and another one of uralita, of 8 meters. Tomorrow, Friday, a third microcement coated pipe will be removed in the same area.

It is the second performance of these characteristics that the municipality makes in this mandate to go "renaturalizing the beach without affecting significantly the users and the daily life of Las Canteras," said the mayor. In any case, the Ciudad de Mar service proceeds, as usual, to

remove other lower volume remains compacted with sand, such as plastics covering pipes, traces of pipes, iron and foundation debris, when they become visible and pose a risk to bathers.

The operation this morning has required closing the stretch of beach affected, between La Catwalk and California Street, while the company that has executed the extraction has deployed a safety and hygiene protocol adapted to be the direct handling of waste industrial with asbestos. "These pipes do not pose any danger to citizens, but you have to adopt security measures when they are handled directly," the mayor explained.

The operators have been responsible for extracting them by modules and encapsulating them for further waste management as established by the regulations.

Ramírez said that Ciudad de Mar is waiting for a study commissioned by the Urban Planning Service to assess the withdrawal of all remaining remains in the area of La Cícer. "We are talking about elements that have been built for a hundred years and we must be very careful not to damage the configuration of the beach," he concluded.